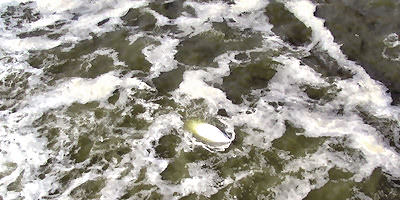 ‘There’s no way out of this… so this is how it ends,’ John thought as he tossed around in the six metre high waves. He had sold his business, bought a new boat and looked forward to a retirement of sailing and sea fishing. In early December, what started as a day fishing with his mates Buzz and Oisin to celebrate Oisin’s birthday, became a fight to stay alive. The experienced sailors had planned their day around the weather forecast; they set off in the morning and spent a few hours fishing before starting their return journey. They radioed the coastguard to let them know that they were about to cross the Manukau Bar. Then things started to go wrong.

Huge waves broke over the boat and rolled it over twice. Buzz was thrown thirty metres and John was a further twenty metres away; Oisin was trapped on board by a succession of waves. He was unable to make a mayday call as the radio had been smashed. Eventually he escaped the boat but couldn’t find his mates. He got onto the upturned hull and made some handles from the boat’s ropes. Then he spotted Buzz and John clinging to each other; they got back to the boat and grabbed the ropes. Now the boat was floating upside down into the Tasman Sea and they feared they would not make it home.

“We were shaking and we were cold; John was in a lot of pain. We knew the situation was bad and we said our goodbyes a couple of times in the first thirty minutes”, said Oisin.

“In that half hour I was convinced we were not going to make it,” said John; “I was thinking there’s probably no way out of this … so this is how it ends!”‘

When they didn’t make contact within thirty minutes of logging their bar crossing, an alarm was raised. Coastguard helicopters, two boats and the police helicopter were dispatched. By the time the rescuers got to the Manukau Bar, there was no sign of the men or their boat. Almost two hours later the wrecked boat finally started to drift back towards the shore; their relief was enormous when they saw land but there was still a treacherous journey to safety – they had to get past the surf line and over the bar where giant waves were thundering into the beaches.

“We had to get away from the boat … we didn’t want to be anywhere near it when we hit the line,” said Oisin. If they had stayed near the boat it could have slammed into them and seriously hurt or killed them. Buzz said the swell was violent as they tried to swim the six hundred metres to shore. “We all got in the water but the next huge wave separated us. The last time I saw John he was lying on his back.” Oisin and Buzz got to shore at Irwin’s Gap, south of Manukau Harbour; there was no sign of John.

“I told Oisin to stay and look out for him and I would try to get help,” Buzz said. Oisin waited for about ten minutes but was so cold he had to follow Buzz. The pair were sure they would not see their mate again. They got to a local farm and waited; a wave of euphoria washed over them when two hours later searchers said their mate had been found alive. John was airlifted to hospital and had surgery on his fractured pelvis and head injuries. He will be in a wheelchair for about two months and then faces at least six months of rehabilitation.

“But he’s alive,” said Buzz. “Oisin and I have minor injuries but we are all very lucky; it could have been so different. We did everything right, but the unexpected happened. Our lifejackets helped to save our lives; without them we would be dead. I don’t know what to say to show how appreciative we are to the coastguard and everyone who helped in the search and rescue.”