The current layout of Aynho has remained largely unaltered since the 17th century with many of the houses dating from this time to the early 18th century. The history and development of the village has been inextricably linked with the owners of Aynhoe Park since the Norman period. 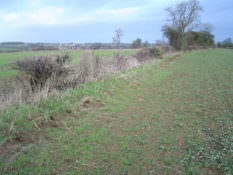 Rainsborough Camp, an Iron-age hill fort to the north of Aynho suggests early activity in the area. Aside from a possible pre-historic burial in the Park there is little evidence to suggest that the village itself was a permanent settlement during this period. Roman artefacts have been found scattered across the village including bone and pottery fragments and spearheads found in the grounds of the Park. 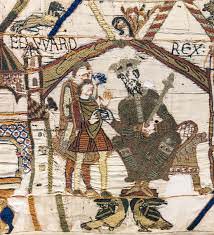 The Manor of Aienho was first recorded in 1043 and was held by a Dane, Aega or Asgar the Stellar/Constable who acted as a royal standard-bearer to Edward the Confessor. The village name is of Saxon origin translated as ‘hill spur of a man called Aega’, referring to its elevated position in the landscape. Its value was then rated at £6 indicating a sizeable permanent settlement. 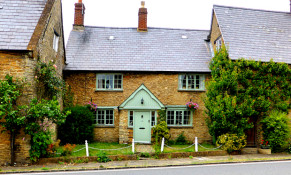 After winning the Battle of Hastings, William the Conqueror granted the manor of Aienho to the French lord Geoffrey de Mandeville. By 1086 the Domesday Book cites Aienho as being worth £8 with a sizeable population of 150, larger than either the neighbouring Charlton or Croughton.

By the late 12th century the manor and associated lands had passed to the FitzRogers/FitzRichards and Claverling family. A pilgrim’s hospital dedicated to St James and St John was built during this time for the relief of the poor, sick and infirm. It stood to the west of the village near the present site of College Farm, but was closed in 1485. The village was also granted the right to hold a four-day Michelmas fair and weekly markets, possibly on the current junction of The Square.

The De Nevilles briefly held Aynho during the 14th century with the Lords of the manor collecting rent from 25 dwellings and 18 cottages. A large proportion of the village was in agricultural use, particularly on the periphery. St Michael’s Church was rebuilt during this time, but only the tower now remains from this period. 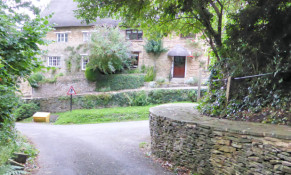 In 1616, Richard Cartwright, the younger son of a Cheshire squire and wealthy lawyer purchased the manor of Aynho and associated estate lands. This included a large portion of village property and 200 acres of deer park to the south of the manor. This family would hold the estate for over 300 years.

During the Civil War Aynhoe was a centre of military action for both Parliamentarian and Royalist forces. After the Battle of Naseby in 1645, the Earl of Northampton’s Royalist troops set fire to the manor and fled.

After the restoration the Cartwrights were granted compensation for damages and in 1662 embarked on re-developing the site with Edward Marshall, the King’s master mason. Little survives of this scheme due to subsequent alterations.

By the late 17th century there were 81 houses in the village. Many of the vernacular dwellings were built between this time and the mid 18th century and still remain today, though often altered through subsequent centuries.

Finer local buildings in the 17th century belonged to yeoman farmers. 21 Blacksmiths Hill is a fine example. With coursed rubble limestone and ironstone detailing this distinctive building was built for Edward Jarvis in 1640, an indication of his wealth and status at the time. 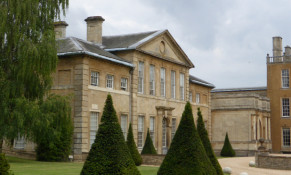 During the 18th century the House and Park began to develop a more formal layout. In the 1720s James Archer was commissioned to expand the house adding the office and stable wings on the north façade and heightening the south. Houses and the orchard were cleared from the north that looked to the village and a screen of trees planted to offer privacy. Within the park there was a formal garden layout with a double avenue of elm trees lining the south approach and a tree lined avenue to the east boundary. This was altered in the 1760s with the intervention of Capability Brown who proposed a less formal parkland with open vistas, sweeping lawns and a ha-ha.

St Michael’s Church was constructed in 1723. The earlier medieval church was in ruins by this point and all was demolished apart from the tower that still remains. This was designed by local mason Edward Wing in a distinctive classical Grecian style intended to mimic the style of the adjacent House.

The layout of the current village started to take form during the latter part of the 18th century. William Cartwright acquired more land during the 1790s with the Turnpike and Enclosures Act. The parkland was extended towards the west re-routing the Deddington Road and demolishing the village houses around Friars Well. An extension of the Park to the east re-routed the south road to Souldern.

Those houses along the road opposite the House belonged to ‘villagers of substance’ including the apothecary and larger village farmers evident in the larger size of plot and building form.

The Square was the commercial centre with shopkeepers, butchers, bakers and inns. It lay on the route of the London to Birmingham road with coaches passing through Hollow Way to the former White Hart Inn and Cartwright Hotel. The raised pavement was probably built during this time to prevent accidents between pedestrians and stagecoaches. Blacksmiths Hill was the site of many of the village tradesmen with the local masons, plasterers and blacksmiths located in this area. 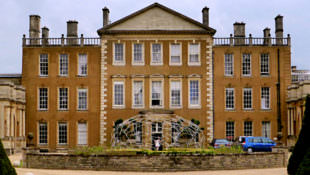 At the start of the 19th century further developments were undertaken at the House by John Soane. These improvements were mostly to the interior, but he also linked the two wings to the main house on the north façade.

Schemes for the Park were proposed by Humphrey Repton. Although there is no direct account of him having worked on the gardens, the new corner Park Lodge and sweeping lime tree drive to the east are indictors that some of these ideas were adopted.

By 1821 the number of village inhabitants had reached 719, a fairly modest settlement largely comprising of farm labourers. Many of these workers would have shared the small cottage dwellings that were densely packed into the centre of the village. These one-up- one-down dwellings could have housed up to 7 individuals. The Almshouses were built a year later, endowed by the Oxford glazier John Baker. These self- contained private residences were built for up to 8 local or Oxford elderly individuals with a small weekly annuity, a rare occurrence during this period.

Aynho has been referred to as the Apricot Village due to the trees that grow outside some of the houses. This may have been a planting scheme introduced by Thomas Cartwright, a keen horticulturist, in the late 19th century. There is no evidence to suggest rents were paid via choice pickings, but some houses still continue this tradition today.

The opening of the Great Western Oxford-Rugby Railway had little effect on the size of the village itself. The greatest impact of an improved infrastructure was the replacement of local thatch on many of the vernacular buildings with Welsh slate, which predominates today.

During World War II Aynhoe Park was used as a fuel dump with Nissen huts, bunkers and concrete roads constructed by the Army. Today, only sections of the road remain to indicate the former site.

In 1954 a tragic car accident killed Richard Cartwright and his son Edward, resulting in the division and sale of the Park.

The village itself saw major development and expansion during the latter part of the 20th century. To the east of the conservation area the footprint of the village virtually doubled with local authority and private housing being built.

The Pediment along Croughton Road, was built in 1956-57 by the eminent architect Raymond Erith. Originally a small house with the later expansion of the gardens, The Pediment is a unique example of classical Georgian architectural features and design from the 20th century.