I was born in Oxfordshire seventy years ago
Into a rural idyll, where the pace of life was slow
I used to roam the bluebell woods
And walked through fields for hours
With seas of poppies, ox-eye daisies
And cobalt blue cornflowers

I used to watch the skylark soaring in the blue
Above a sea of rippling corn with thistles poking through
I fetched fresh milk (still warm!)
From the farm across the way
I’ve never tasted such delight – not even to this day!

We’d joy-ride upon tractors with a hard, spring-loaded seat
And take care near the thresher
As it spewed it’s bales all neat
Then as the farmers harvested they always had a gun
To catch poor rabbits unawares when they began to run!

But it wasn’t always summer
Times were harsh when north winds blew
I trudged through snow my height
Along the grass tracks that I knew
But nothing stopped – we carried on
“Never mind the weather
We’re all in it together.” 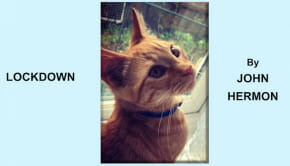 The Stanbridge House Anthem & A House I Knew by Edna Sparkes →