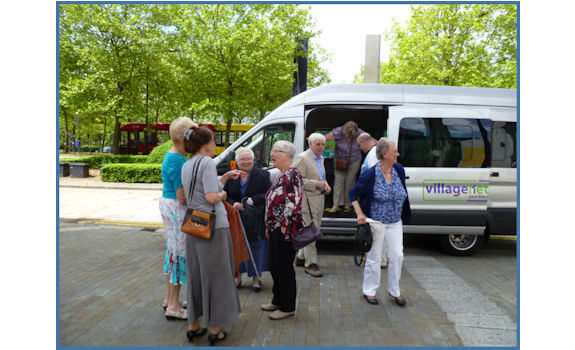 On Wednesday 24th June, fifteen ladies from the WI and one gentleman set off to see Evita at the theatre in Milton Keynes using the Northampton Community Bus.
Evita with music by Andrew Lloyd Webber and lyrics by Tim Rice, follows the early life, rise to power, charity work and eventual death of Eva Peron, Juan Perón’s second wife.
Emma Hatton already a leading actress in the West End, played the role of Eva with sensitivity and was ably supported by Gian Marco Schiaretti  as Che Guevara the narrator.  He may well be a newcomer but he performed his role with confidence, dominating the stage when he needed to showing off his powerful, versatile voice.  The supporting ensemble were also outstanding with excellent dance scenes and singing.
Whilst waiting for all the ladies to assemble at the end of the performance a lady who had seen it four years ago told us that this performance had been far better than the previous one she had seen, displaying more intensity, power and emotion.  So a really enjoyable afternoon was had by all and a big thank you to our cheerful driver who got us there and back safely.