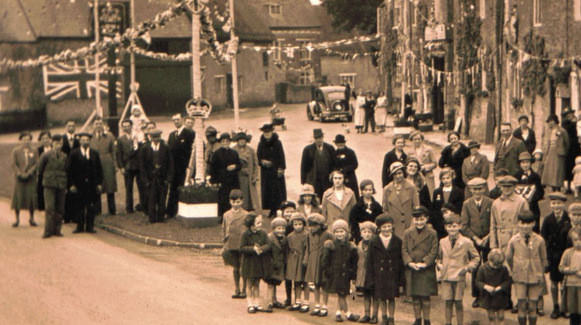 Just before Christmas I was contacted by the above. Barry told me that he was born in London and he and his mother were evacuated to Aynho and lived in the Great Western Arms between July 1944 and July 1946. Barry recalls that the landlord at that time was Charles Harris who owned a field that he leased to the U.S. Army and that he also kept pigs and grew strawberries in a large field. He remembers two sisters named Sheila and Ceenie living nearby and the three of them travelled to school in Aynho by coach each day. Barry remembers the Squire opening his grounds for Market Days and picking potatoes for pocket money. Water was drawn from a hand pump in a nearby field. Another past-time was to stand on the station platform as the American troop trains went slowly through calling out “Got any gum chum?” They never failed to lean through the windows and pass out packets of chewing gum. Barry is seeking further memories to add to his family history. If anyone has any memories of him, the Great Western Arms, Aynho School or the names of Aynho children between July 1944 and July 1946 Barry would love to hear from you. Barry can be contacted through Brian Reynolds – 01869 811007.