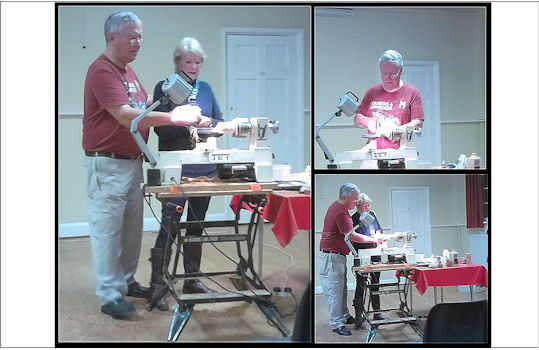 November’s meeting was one with a difference.   Instead of just a talk we had a demonstration as well.  Malcolm Hill, a wood turner from Northamptonshire, brought along his equipment and we watched him create a vase, a pear and a spinning top which spun beautifully.  As he worked he explained how he started, what he was doing and why.  June was so taken with it all that she was allowed to have a go herself (with a guiding hand from Malcolm).  Afterwards there was a draw and 3 lucky ladies won the pieces we had watched him make.  Fortunately the rest of the group did not have to go home empty handed as he had brought along a wide variety of objects he had made which we could buy at very reasonable prices – very useful in the run up to Christmas.  A most interesting and enjoyable evening.