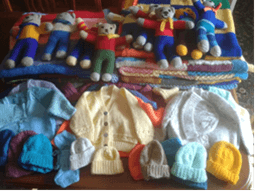 AYNHO WI MEMBERS  (and Sybil Stevens a non-member) have been knitting  for the Charity “Greenfields Africa”.

This Charity works with pregnant mothers in the poorest areas of Uganda and Kenya. Mothers to be are given a bag of clothes, blankets etc if they attend an antenatal clinic three times. The scheme has produced great results in the fight against infant mortality and in the health of the mothers.

The W.I. first heard of this charity through a group called The “Fish & Chip Charity” so called because new mothers had only a newspaper in which to wrap the baby