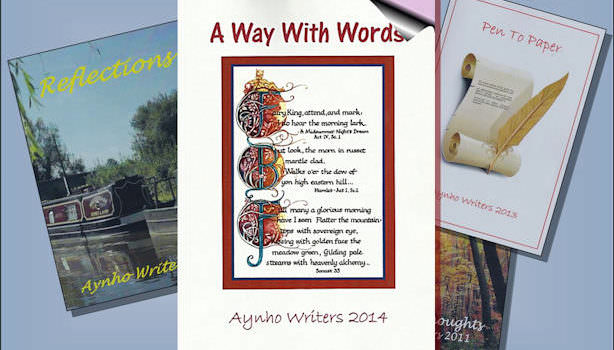 Preface
Aynho Writers Group was established in 1996 and we have published an anthology every year since.  This year we present our latest selection in A Way with Words.  We offer our usual mix of prose and poetry, fiction, and life’s experiences.  A special feature in this edition is a small collection of fairy tales for grown ups.

Our membership has remained unchanged this year and Jayne Ryman has continued to put our anthology together.  Fortunately, she is still able to rely on Brian Reynolds for help with formatting and printing.

June ran a successful workshop for us earlier in the year but in September we thought we would try the approach that artists find rewarding and seek inspiration for our writing at Upton House.  A group of us were given a delightful and informative session on the lives of the servants at the house during the 1930s and 1940s.  Our heartfelt  thanks are due to Ann Thomas, the volunteer guide, who shared her own research and revealed the day to day work in the servants’ areas of the house.  We hope that the writing we produce will be of interest to her and to future visitors.

Philip’s success, in having the first of his fantasy adventure novels for teenagers published next year and the second one commissioned, has meant he no longer has time to facilitate our meetings.  June and Keith continue and Fiona will take on the first four months of 2015 to make up the team.  Other writers have had successes this year or have works pending publication.  These are recorded in the About the Authors page at the end of this anthology.

The writings in this anthology represent the variety of ideas and experiences that inspire our writers.  We hope you will enjoy them as much as we do at our monthly read around.