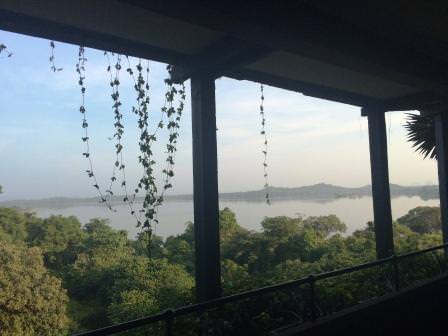 Sri Lanka in winter seemed like the perfect holiday destination and more than lived up to expectation. Beforehand, we knew very little about Sri Lanka but thought it would be a good introduction to Asia and maybe a warm-up to its nearby giant neighbour India, which I’ve heard can be a huge culture shock. Sri Lanka is certainly noisy and congested in the towns, but generally doesn’t share its roads with wandering elephants and cows, though there are plenty of monkeys skipping cheerfully alongside your car when you slow down on rural roads.

Known as the “teardrop island”, Sri Lanka resembles a droplet of water off the southern tip of India. Small enough to drive around in two weeks, it boasts a wealth of culture, cuisine, wildlife, vegetation and vistas. The diversity was breathtaking and every place we stayed in was a complete contrast to the one before.

Our trip took us to many of the famous sites around the island, starting in Negombo, a small fishing village close to Columbo, where we flew in. We were met by our driver, Chananda, a charming, softly spoken man, who was unfazed by the busy roads. The Sri Lankans like to use their horns repeatedly and I soon realised it wasn’t in annoyance but to alert other road users. His patience ran thin, though, when we were waiting at yet another set of roadworks and were suddenly shunted forward by a jeep that had been bumped by a water bowser behind him. No one was allowed to move on until the insurance company had come out to assess the damage, which was slight, but it meant us sitting in the car, thankfully air conditioned, whilst the brightly decorated lorries and buses, cars and motorbikes rumbled past with much hooting of their horns.

Arriving at our airy jungle hotel on the edge of a huge lake seemed like paradise. We were welcomed with a cold towel and a drink of tropical fruit on the terrace overlooking the infinity pool. There were dozens of monkeys, many with their babies clinging on, swinging from the vegetation or jumping and splashing into a pool which seemed reserved for them, and peering through our balcony doors hoping to be given some titbit. At night, the jungle came to life with a symphony of exotic creatures shrieking, chirping, croaking and whistling.

No trip to Sri Lanka is complete without a trip to the many Buddhist temples and astonishing number of Buddha statues, many carved out of the rock in which they stand. The so-called highlight is a visit to the Sacred Tooth Temple in Kandy, where pilgrims flock to pay their respects to Buddha. Our visit was at the end of a long hot day in Kandy because the opening of the doors of the tooth relic only happen at 7pm. We queued in stifling heat through the huge hall and up the staircase, while men dressed in lavish gold and red costumes rhythmically pounded drums. At the moment that the tooth relic was revealed, the crowds were so dense that we saw very little, but the experience was unforgettable.

Next day, we drove up to the hill country where it was noticeably cooler and the locals were bundled up in sweatshirts and woolly hats. To us it was like a cool, but pleasant British summer, a relief after the heat of Kandy. We drove through the lush tea terraces and stopped at a tea factory where we were shown how the tea is processed. The Grand Hotel, where we stayed, dated back to the turn of the last century, and we partook of high tea on the lawn. It was quintessentially English, cucumber sandwiches and cake, with the exception of a few Sri Lankan specialities.

One of the highlights of the trip, and there were many, was our visit to the Bundala bird sanctuary in the south of the island. We left our hotel before dawn and picked up our jeep at the entrance to the park just as the sky was turning pink. Unlike the other main game parks, Bundala is a hidden gem and we hardly encountered any other jeeps. We drove through extensive wetland areas, past lagoons, lakes and ponds. There were many exotic birds, such as painted storks, which looked as if they were carved out of wood with their yellow-orange painted bills. Then there were the black herons standing motionless at the water’s edge, their wings spread wide like washing drying in the breeze. We saw many peacocks, often with their fan-tails out wide, pea-hens and a little one pattering along behind its mother. Our knowledgeable driver pointed out the extraordinary sight of a tiny bird, the Kentish plover, that flies all the way from Kent to Sri Lanka each winter. There weren’t only birds. What we thought was a log in one of the lakes was a crocodile, lazily waiting for some prey to wander past. There were monkeys, of course, and the bizarre-looking land monitor, a giant lizard that lumbered across the road feeling its way with its flicking tongue.

From Bundala, we drove round the south eastern coast where there were many reminders of the terrible tsunami that claimed over 30,000 lives. The most poignant were the many gravestones which lined the road. Gazing at the crashing waves, it was not hard to imagine the tide turning and rising up to envelope the coastline. Much has been restored but many of the villagers who lost their homes were moved inland into concrete homes. The government told them this was for safety reasons, but within a few short years big tourist hotels have sprung up close to the sea. But I got the impression that the Sri Lankans aren’t resentful of these changes. They are proud of their island and its history and very much want visitors to enjoy its beauty.