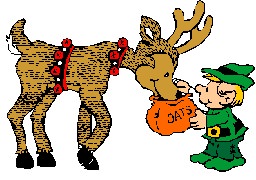 Crossing The Border, a Nico Story by June Smith

It was January, just two weeks after Christmas. Father and Mother Christmas had gone away on a short holiday to Lapland to have a rest after the really busy time they had had at Christmas – delivering toys to all the children in the world. Father Christmas’s elves were also taking a break after all their work making the Christmas toys. They were having a wonderful time enjoying the snow – tobogganing down the mountain slopes, skating on the frozen lake and having snowball fights.

On this particular day they were all having a nap after lunch while Nico, the strange elfin boy who had magic powers inherited from his father, Merlin, the wizard, was in the reindeer stables, sitting in the hay and talking with Prancer, one of the reindeer. Suddenly there was a great deal of noise and activity – raised voices, the rumble of wagon wheels and calls for help. Nico ran outside but was only in time to see two large covered wagons, drawn by reindeer, disappearing at speed.

All was quiet as NIco entered the elves’ dormitory. There was not a single elf to be seen – they had all been kidnapped. The only clue was a red cap on the floor – part of the uniform of the dreaded Red Dwarfs. They were a fearsome tribe who lived beyond the forest in the land of Redmania, ruled over by the terrible Giant Redbeard. They were known for terrorising villages and stealing young children to act as their slaves.

What should he do? What would Father Christmas say? Nico felt very frightened. He went to tell Prancer what had happened and Prancer munched his hay and thought for a bit and then said,
“Go and see your father, Merlin, and ask his advice. I will carry you to his house on my back.”

Nico’s father lived in a cave called Merlin’s Moon at the foot of the mountain. Nico told him quickly what had happened and Merlin looked in his magic crystal ball and said:
“ I see Father Christmas’s elves now in the land of the Red Dwarfs and Giant Redbeard is setting them to work to build wagons and houses. We must think of a way we can rescue them”

But there was a big problem about that. The land of the Red Dwarfs was almost entirely surrounded by thick forest and tall prickly brambles and high thicket walls – impossible to get through, all except for one place where there was a big gate made of heavy iron and fierce guards were always on duty there. Crossing the border was going to be difficult.

Then Merlin said “I will give you some of my magic moon dust to sprinkle on yourself to make you invisible and that should give you a chance to slip through the gate when the guards open it up. You can then find out where the elves are. Then, I think we could call on some of your friends to help you and your mother can also help.” Nico’s mother was Nimue, the White Witch, who could also do magic. So the plan was hatched.

Nico was able to slip through the gate invisibly when it was opened and eventually found all the elves working hard in a forest clearing, felling trees, although they could not see him. Hiding amongst the trees, Nico recognised his good friends Grandfather Frost and his daughter – the Snow Maiden, standing nearby. At a given signal from Nico, Merlin appeared in a puff of purple smoke. He waved his wand and muttered a spell and then told the elves to stand in the middle of the clearing. Then Grandfather Frost strode forward and thrust his huge icicle club into the air and instantly there was a deep frost everywhere and everything froze to the spot except in the forest clearing where the elves were. The Snow Maiden then waved her wand and a great white blizzard of snow swept through the land blocking all the roads.

By this time Giant Redbeard had appeared and was enraged to see what was happening and tried to reach the elves, but could not move because of the snow. Suddenly, from out of the white blizzard of snow, two white unicorns flew down carrying a large white sparkling hammock between them. These were Galaxy and Universe, unicorns belonging to Nico’s mother, Nimue. The hammock was lowered onto the forest floor and all the elves tumbled into it and Nico also, who was now visible again. The unicorns took to the air and Nico waved his thanks to Grandfather Frost and the Snow Maiden, and away they flew across the border of Redmania and over the forests and mountains back to Father Christmas’s house at the North Pole.

Father and Mother Christmas had returned and were very worried when they found the house empty. Then suddenly the sky was filled with sparkling sunshine and a huge colourful rainbow and from over the rainbow flew the two dazzling white unicorns with their precious load. There was great rejoicing and they all had a joyful party with lots of good things to eat and exciting games to play. They were all so glad to be back together again.