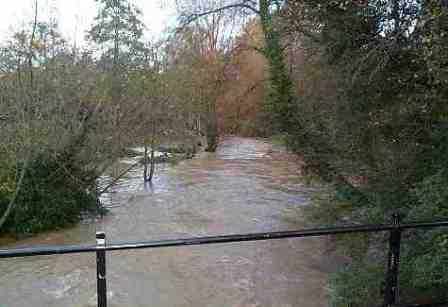 Be Out By Midnight, by Keith McClellan

“Mummy, Santa will come tomorrow won’t he. Won’t he Mummy?”

“Of course he will, my little treasure. When you wake up in the morning he will have been, especially for you. Now off we go to bed. Say night, night to Daddy.”

Megan sat next to Ben who slid an arm round her shoulder.

“What do you want to watch?” Ben clicked the TV on.

“A film or something; whatever’s on till bedtime, I’m so tired. It’s been a long day. This weather doesn’t help. It’s so depressing, all this rain and Jamie under my feet all the time: can’t even take him down to the playground to wear him out.”

“So, you’ll cook the dinner then?” said Megan.

“I don’t mind helping. It’s better than being out in all that rain. Hark at that wind. It’s really building up.”

“You don’t think the river will flood do you? We’ve had so much rain lately. It did look really swollen.”

Later the local news mentioned some local flooding but not in Mollingford.

“I’m going up to bed, love. Will you get Santa’s pillowcase ready before you come up?” Megan kissed his cheek and went upstairs.

Ben fetched the pillow case and gathered Jamie’s presents. He heard shouting outside. Drunken louts, he thought, overdoing it on Christmas Eve as usual. As the shouting got nearer it sounded like a single voice. He stood by the front door.

“River peaking. Get out by midnight. Drive to Bellgate School.”

Ben opened the door. There was no sign of water approaching but a figure in a high-vis jacket was shouting the warning as he continued along the road. Picking up the pillow case, Ben hurried upstairs and left it by Jamie’s door. He called Megan quietly and went into the bedroom where she was starting to undress.

“Did you hear that? There was a bloke walking along shouting at all the houses. I couldn’t see any sign of flooding on the road. What do you think?”

“These things can be sudden; better safe than sorry. We’d better do what he says.”

“OK I’ll just bring the computer and the TV upstairs. Not much else we can get up here in the time. It’s not going to be more than a few inches surely?” said Ben.

Megan packed some clothes and washing things in a bag and Ben lifted a very sleepy Jamie out of bed. As he backed the car out of the drive other cars were moving slowly up the road. It was nearly midnight when they reached the school after the ten mile drive.

A crowd of villagers was standing around as Ben and Megan parked on the verge.

“There’s no one here to open up,” said Andrew Bennett, their next door neighbour.

The crowd grew in number and impatience. Eventually the caretaker approached unsteadily on his way home from the pub.

“Where have you been? You’re supposed to have opened up. We need to get some rest,” said Andrew Bennett.

“What’s all this? What do you all want here?” said the caretaker.

“No one told me. The wife would’ve phoned.”

“She told us she’d heard nothing.”

The caretaker rang the District Council but there was only the message service. He called the Police. They didn’t know anything but said they would take a look.

“There’s something fishy about this,” said Ben, “I think we ought to go back.”

“Are you sure?” asked Megan.

“The police will be there. We’ll soon find out.”

As they entered the village there was no sign of a flood. The front door swung open as Ben pushed it. The Yale lock was hanging off the end panel. Ben went upstairs and put Jamie back to bed. There was no pillow case. In the spare bedroom the television and the computer had gone. He stood in the drive. A police car approached. He waved it down.

“Yes Sir, I’m afraid you’ve all been subjects of a con trick. We’ll be coming round and taking details of your losses and the damage. It’ll take us most of the night I’m afraid, Sir.”