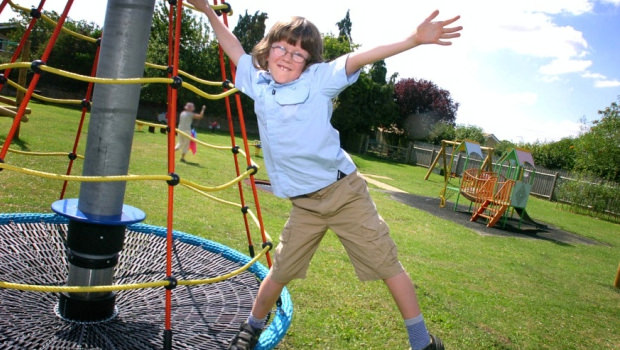 Residents in Aynho have raised £5,000 towards replacing the village’s ageing playground equipment.

The area in The Glebe had fallen into disrepair over the years and the parish council identified the playground as a site that needed updating as part of its community plan.

Thanks to help from villagers and a £40,000 grant from waste disposal company Viridor, the transformed area was opened by seven-year-old Frankie Bowe on Saturday.

Fi Burge, parish councillor, said: “Every five years the parish council does a village plan to see what needs doing here, so we have been discussing this idea since at least 2008.

“Some of the equipment was about 40 years old and even some of the councillors remember playing there when they were younger!

“The children absolutely love it. All the equipment is sustainable as it is in a conservation area so we have included a nature trail, trampoline and a big climbing frame.”

Families gathered at the playground on Saturday to host an official opening.

Work was carried out by Bucks Playground Facilities and was completed in about two months. The village had a competition to see who should open the new facility, with Frankie being chosen to do the honours.

Mrs Burge said: “Frankie was born in the village and was playing in the playground as soon as he could walk, so we felt he was the perfect choice to open the new area.

“Villager Kay Anderson deserves a mention as she was really good in organising events to help raise the funds for the area, including community weekends for the various clubs that are based here.

“Aynho is a village with a very strong community spirit and people are keen to make it a nice place to live.”