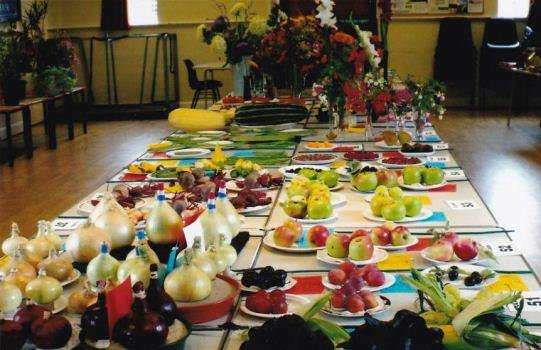 A number of Members reported that their flowers were over but on the day, although we were short of Gladioli, there was a good variety of flowers and the Aynho Gardeners did well with their entries in most classes. The nationwide craze for baking, encouraged by The Great British Bake-off was noticeable in the Homecraft classes with large numbers of entrants.

The shield was awarded to Robin Cox who had an outstanding number of first prizes – 21 in all. He also won the cup for the best vegetable in the Show with a magnificent platter of beans, carrots and tomatoes. He was also awarded the George Ashbrook Vase for some lovely ball dahlias in a gorgeous purple colour. As the Banksian Medal was awarded to Robin Cox last year, he was unable to win that this year and this was awarded to Andrew Bellamy. Finally the Homecraft plate was justifiably won by Helen Cox.

In conclusion, the Show went well and was well attended and supported by Aynho residents. The Committee, with the assistance of Robin Cox, all worked tirelessly before, during and after the event and their support was appreciated enormously. Next year Carol McClellan will be organising and running the Show.