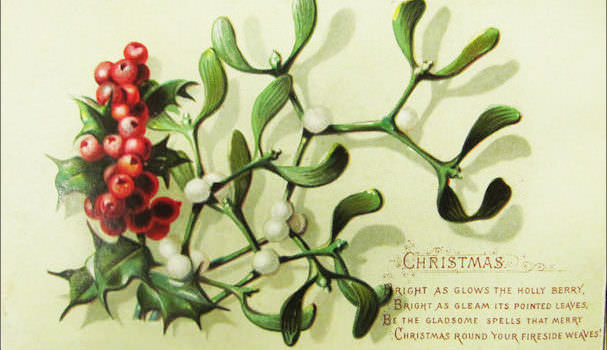 Holly
There are about 400 species of holly which can grow up to 15m in height and live for 300 years.  It produces either male or female flowers but it is  the female that goes on to produce red berries as long as there is a male within a 2 mile radius.  A lot of wildlife rely on the holly tree.  It provides dense cover and good nesting opportunities for birds, while its deep, dry leaf litter may be used by hedgehogs and small mammals for hibernation. The flowers provide nectar and pollen for bees and other pollinating insects, the leaves are eaten by caterpillars of the holly blue butterfly, as well as various moths while the smooth leaves found at the tops of holly trees are a source of food for deer in winter.  The berries are a vital source of food for birds in winter, and are also eaten by small mammals such as wood mice and dormice.

English Ivy
English Ivy has dark green glossy leaves which have 3 or 5 lobes (like a maple leaf) on young stems and heart shaped on flowering ones. In September/October time it produces yellowish-green flowers in small clusters which are followed by ripe fruit from November to January.  Ivy’s late flowering season makes it a valuable source of nectar for many insects before they hibernate particularly bees and butterflies and the berries provide an abundant food source during the most severe winter months when there is little else to eat.  As ground cover in woodland it greatly lessens the effect of frost and growing on trees it provides hiding, roosting, hibernating and nesting places for animals, birds and insects.

Mistletoe
Mistletoe has evergreen leaves which are elliptical in shape.  It is a parasite living on trees and penetrating their vascular system sucking out nutrients and water. It is slow growing, however, and a healthy tree can usually cope with some mistletoe although it may weaken it. The most common host tree in the UK is the apple but poplar, lime and hawthorn are also used.  There are centuries of superstition attached to the mistletoe.  To the Ancient Greeks it was sacred while the Druids hung sprigs outside their doorways as a protection against thunder, lightning and other evils. In Norse Mythology, Baldr, one of their gods was killed by a weapon made out of mistletoe.  His father Frigg’s tears became the pearlescent berries and he decreed that instead of being punished, mistletoe should become a symbol of peace and friendship.  Some think this was the origin of kissing under the mistletoe!

Did You Know?
*  Holly: The use of holly as a symbolic winter decoration goes back in history to the Celtic peoples of Northern Europe, who decorated their homes with it during the time of the winter solstice, or Yule.
*  Holly: Holly extracts have been used in folk remedies for dizziness and hypertension. Today, holly leaf preparations are used in alternative treatments for coughs, digestive problems, jaundice, joint pain, swelling, hypertension, and to boost heart health. But health experts note that very little scientific research has been published to verify the health benefits of these remedies, and that those pretty red berries are known to be poisonous if swallowed.
*  Ivy:  Wearing a wreath of ivy leaves around the brow is supposed to prevent drunkenness
*  Ivy:  All parts of the ivy plant are toxic to humans.
*  Mistletoe: Some skin cosmetics, shampoos etc. contain mistletoe though it is rarely mentioned on the main label.  Look out for it in the list of ingredients under its scientific name ‘Viscum Album’
*  Mistletoe:  The proper etiquette for kissing under the mistletoe:
1. The man can only kiss the girl on the cheek.
2. When he does so he removes one berry from the sprig.
3. When there are no berries left the kissing stops!