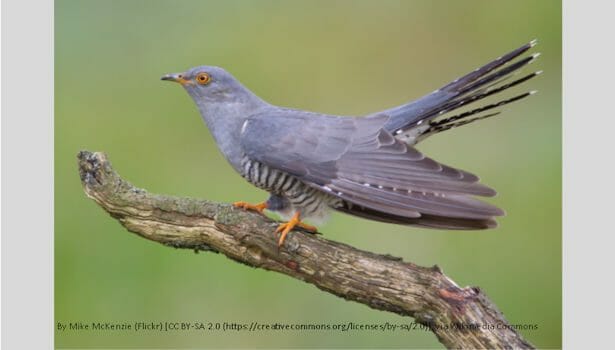 Biodiversity Group Bird of the Month: The Cuckoo

The cuckoo is about the same size as a dove with blue grey upper parts, head and chest and dark horizontal barring underneath.  In late April or early May the cuckoos arrive having spent the winter in central and southern Africa.  Only the male makes the distinctive ‘cuckoo’ sound using it to claim his territory, attract a female and defend her throughout the summer.  The female sets up her own territory and then watches and waits.  Timing is crucial if her egg is to be accepted; too early and the host bird will be suspicious and eject it, too late and it will be left unhatched as the host birds start feeding their own young.  Once the cuckoo chick has hatched it uses its flat back to lever the other chicks and eggs out of the nest.  It then starts its begging call which is very fast, mimicking a whole brood of chicks and so encouraging the hosts to provide as much food for one mouth as it would for many.  The cuckoo chick fledges after about 19 days and is then fed for another 2 weeks.  By now it is full sized and the host bird, which is a lot smaller, will sometimes perch on its back to feed it. The cuckoo is on the red endangered list.  In the last 25 years the population has declined by more than 70%.  There is still some uncertainty as to why but it may be a decline in the  number of host birds, a shortage of moth caterpillars,  milder springs resulting in the caterpillars being around earlier and the Sahara desert, which is on their migratory route and already 1,200 miles across, getting even larger.