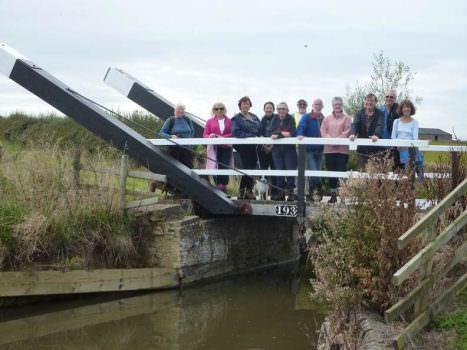 Twelve walkers set out for Souldern this morning.  We took the Portway footpath ,which was a little overgrown in places, and into the freshly harvested field beyond.  We were soon past Souldern church and into the village.  We made a short unintended deviation before tacking the long concrete farm track down to Souldern Grounds.  Beyond the very tidy, clean farmyard we reached the long viaduct and passed under it towards the canal.  The swing bridge was raised although there was no immediate canal traffic.  The bridge is beautifully balanced, so it was easy to hold the long arms and lift them so that the weight of the bridge lowered it into position.  I took a few pictures as illustrated and, once the bridge had swung up to its raised position, we continued along the canal greeting the crew of an aptly named ‘Sunshine’ longboat as they cruised towards Oxford.

We crossed the canal at Wharf farm and passed over and under railway lines before climbing towards Souldern.  We took a footpath steeply down hill to the freshly harvested fields of Upper Aynho Grounds, walked through to Souldern Mill, where the ford stream was well below the road, and returned to the Pavilion for the usual welcoming refreshments. 7.1 miles in all. 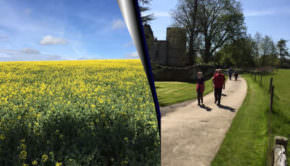