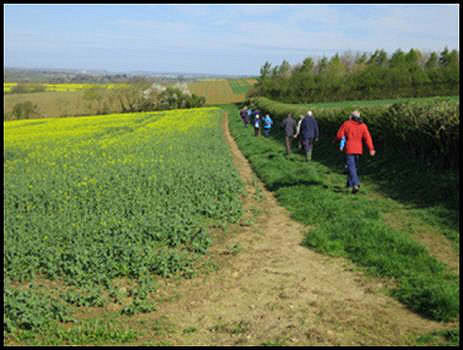 Nine of us set off this morning led by Ian. We walked down Miller’s Lane towards the ford but it was still quite deep and fast flowing so we skirted round the top and continued along the field edge towards the M40. The ground was dry underfoot and the crop was quite advanced. A large tree felled by the winter storms lay across the path but we circumnavigated it well enough. We passed under the motorway and approached the viaduct. This seems to be a fly tipping centre. recently a huge heap of tyres lay there. These have now gone but an old mattress is among other  rubbish spoiling the countryside. Once out on the road we passed the Great Western and took the canal path towards Wash Lane. Water levels were back to normal and most of the path had dried out. Wash Lane is always a demanding climb but it was very pleasant in the sunshine. Souldern Village was its usual pleasant sight but once past the church the overflowing stream down the concrete track to the sewage works continues to flood the path. The walk back via the Portway tunnel was much drier than we expected and we arrived back in just over two hours very pleased to see Kay II had the food ready for those who had ordered it and coffee and cake was also very welcome.