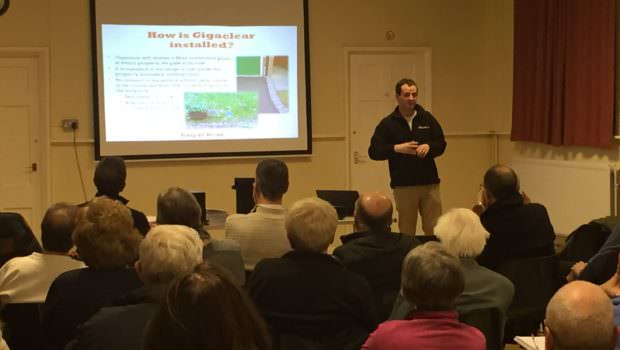 The residents of Aynho and Croughton have clearly demonstrated the demand for Ultra Fast Broadband and Gigaclear announced on 20 November that they are now taking orders!

This is great news and brings us a step closer to getting a broadband service which is fit for the 21st Century.  Joe Frost, Gigaclear’s marketing manager, told residents in Aynho that as soon as we reach a 30% level of orders – which for Aynho means 87 orders – Gigaclear will go ahead and install the Fibre Optic network.  He also hinted that he thinks this will be achieved by February 2015 and that installation would take place in March/April 2015.  As of Thursday 4 December 55 orders have been placed  –  so just 32 more are required.

As you will know this is a wonderful opportunity to have a superfast Broadband service in Aynho, which is fit for the 21st Century with the capacity to grow.  To my mind superfast Broadband is an essential utility like gas or water. It needs a completely new fibre infrastructure to deliver it, and Gigaclear are prepared to make the necessary substantial investment now.   We have been told that BT have no plans to deliver a fibre service to Aynho before 2017 at the earliest, and even then it would still rely on the copper wires to our homes – rather than the full Fibre to the home installation  which Gigaclear would install.

I would like to take this opportunity to clarify a couple of issues that have come up in the past few days when the Gigaclear sales team have been visiting:

Gigaclear have already tentatively  scheduled the cable installation  works to take place in the early Spring of next year – but they can only commit to this if the 30% target is met –  we would not want to miss this early installation date  that they have ‘penciled in’ for the Village!

Remember if you are within the first 30% to sign up you will benefit from a free upgrade to their next level of service for a year.

If you would like to get in touch with the Sales Team who are currently visiting the village – their manager is Michael Richardson who can be contacted on 07747 273950 or at Michael.Richardson@gigaclear.com   You will have the opportunity to talk to them in detail and raise and questions you may have.

If you want to place an order you can do so now by visiting Gigaclear’s site at the following link.  You can also find  more information in the post ‘Why & When’ here